Rallying for a Cure

A Husky football player raises the profile of ALS.

Every day, former Husky football player Phil Green can feel his independence slipping away. He uses a walker to get around. Two months from now, he may no longer have the strength to use his walker, and he knows that, eventually, he will have difficulty breathing and swallowing.

He’s using his time the best way he knows how: by making this invisible disease visible.

“At some point, it’s very difficult for people with ALS to get around. People are pretty much hidden and isolated,” says Green. “So the impact of ALS is limited to friends and family. It’s kind of an unseen disease.”
The game plan

After his diagnosis, Green got to work. He learned that ALS (also called Lou Gehrig’s disease after the famous baseball player) results from a communication breakdown between motor neurons and muscles. He also realized that he never saw anyone with ALS, nor did he know anyone with the disease — a byproduct of the disease’s quick and lethal course.

Green’s response was to become a very, very visible ALS patient. In fact, he’s become an advocate for ALS research.

“I want others to see and understand what this disease is and how quickly it progresses,” says Green. “I want to engage with as many researchers as possible so they can see this disease in a person and not just study it in a lab.

“I want them to know that what they’re doing has purpose,” he says.

When Green first came to the University of Washington, he’d never played football, but he admits that he excelled in a culture of “bigger, faster, stronger,” and was a member of the 1991 national championship team under Coach Don James.

“It was a phenomenal experience for me. It helped shape who I am and how I approach life,” says Green.

While on the team, he also found himself playing another role, one that comes naturally to him: that of a connector. “Usually, kickers are kind of isolated from the rest of team practice,” says Green. “I was able to bridge those worlds.”

Today, Green is again bridging worlds, and his new field is the ALS community. He joined the leadership council at Augie’s Quest, a group, founded by Augie Nieto, to help find a cure for ALS. He connected with former pro football player and Washington State University alumnus Steve Gleason, who also has ALS, and together they formed the Boeing Apple Cup Series ALS Challenge. Green also reached out to friends at UW Athletics to help raise awareness around ALS.

Green’s efforts caught the attention of Michael Regnier, MD, vice chair for research in the UW Department of Bioengineering and the Washington Research Foundation Endowed Professor of Bioengineering.

Regnier, who studies the molecular mechanisms of cardiac and skeletal muscle disease, was about to open a new center focused on muscle research affiliated with UW Medicine’s Institute for Stem Cell and Regenerative Medicine (ISCRM), and he thought Green might be interested.

The new National Institutes of Health-funded Center for Translational Muscle Research at UW Medicine, which launched in October 2019, will investigate everything from muscle-related proteins, genes and cell biology to the design of potential treatments for devastating muscle diseases like ALS.

Needless to say, Green was pleased to get Regnier’s call. “They talked to me about what they were doing, and I talked to them about what I was doing,” says Green, “and we saw there could be a connection.”

He wants a cure for the invisible disease.

“UW Medicine has a significant track record of success in other disease areas,” says Green. “If we can leverage the muscle and brain power of this institution on behalf of ALS, we can make a tremendous impact.” 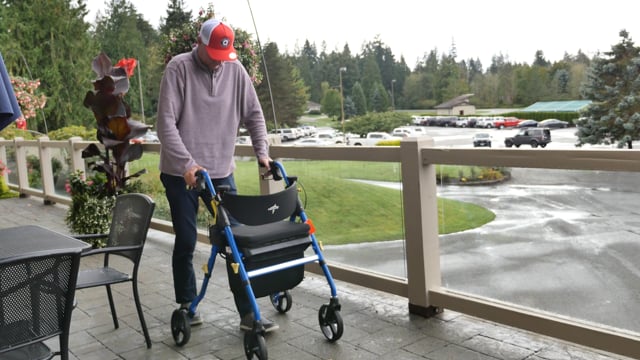 To help find a cure for ALS, make a gift today to the new Center for Translational Muscle Research at UW Medicine. Your generosity helps move the needle on life-saving research.